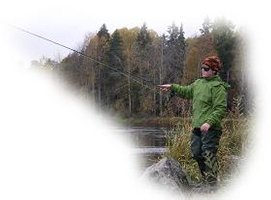 The Gysinge rapids include the beautiful and fish-rich rapids around Gysinge Bruk and part of Färnebofjärden.

Best known for the enjoyable grayling fishing in Swedens

autumn, as well as directly after high tide between the end of May and June.

The trout population is maintained by regular stocking. Fishing in the rapids is mainly from the banks.

There is plenty of space for fishing, so the chances of a bite are big despite the many fishermen that find their way up to the area.

In the calmer waters there are plenty of pike, zander and perch to be found, especially pike, which are sometimes quite numerous and are known to be extremely large. Other typical fish include eel, breem and ide.